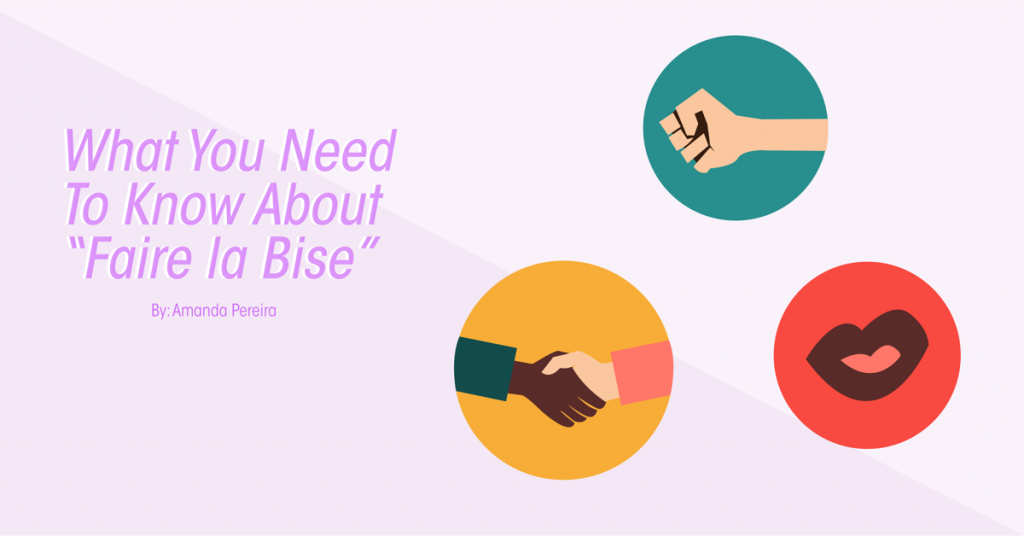 Different countries have different ways of saying it, but it is most commonly known by its French name, “faire la bise,” which means “to give a kiss”.

As someone who grew up with European parents, greeting with a kiss was always part of my culture so I learned at an early age the commonly acceptable and not awkward way to do it. While this custom seems completely normal to those who grew up with it, to those who don’t know about it, it can be totally weird. Especially when they see someone greet their family members or close friends with a kiss.

But properly doing “la bise” isn’t as simple as you’d think. Depending on where you are in the world, the way you do it, the people who do it, and the people you do it to can greatly vary.

Greeting with a kiss is something that is only done in certain countries. In Italy, France, and most of Europe, greeting with a kiss is totally normal. Some places in South America, including Brazil, Chile, and Argentina, are also known for the fact that they greet each other with a kiss. While it is most common in Europe and South America some other countries, such as the Philippines, have been known to use a kiss to greet each other.

Whether or not a cheek kiss is appropriate depends on the country and its culture. It is done commonly between family, friends, and acquaintances, between a man and a woman, two women, and – depending on the place – two men.

How do you do it?

In France, the way you greet with a kiss can change based on where you are in the country. You first offer your right cheek, but the number of kisses can vary from one to as high as five depending on where you are in France. But it doesn’t really matter whether or not you’re in France, French colonies and cultures all around practice the custom of greeting each other with a kiss.

In countries like Spain, Portugal, Italy, and most of Europe it’s safest to go for the quick two cheek kisses. Starting with the right and then going for the left. Depending on how well you know someone they may give you a handshake, but the two cheek kisses is the standard for most places in Europe.

Some countries in Europe have more specific rules when it comes to greeting each other with a kiss. For example, in the Netherlands, it is common for people to greet each other with exactly three kisses, going from the right, to the left and back to the right. Another example is Germany, where greeting with a kiss isn’t as common as it used to be, but when it is done, it is commonly done only once on the left cheek.

In the Middle East, while a firm handshake is the common way to greet each other, if a man and woman are related or married they may greet each other with a kiss on the cheek.

While greeting with a kiss is very uncommon in Asia, people in the Philippines have been known to use check kissing as a way to greet each other.

What are some other forms of social greeting?

In Australia, if two people know each other well they might greet each other with a kiss. But in Australia it is most common to get a solid handshake and a friendly “G’day” when greeting someone.

In Japan, the Japanese will greet each other with a bow. The angle and duration of the bow can vary depending on the situation.

In India, a handshake is common with non-locals. But the proper way to greet someone in India, is to place your hands palm to palm in prayer position, tip your head forward and say, “Namaste.”

In the United States, unless you come from a culture that practices “faire la bise” or other form of social greeting these are seen as fairly taboo. Typically, in the U.S people will greet each other with a handshake and sometimes maybe even a fist bump.

One of the more interesting ways to greet someone comes from Tibet. In Tibet, they actually greet each other by sticking out their tongues a little bit. This is done as a way to show each other that they are not a reincarnation of a cruel 9th century Tibetan King who was known for having a black tongue.

While knowing all this can relieve some of the awkwardness that comes with social greeting, it’s understandable to still feel that initial horror of making a fool of yourself. So, if you still find yourself feeling this way just remember to let them take the lead and just go with it.

Who knew a simple greeting could be so complex? How do you greet others?