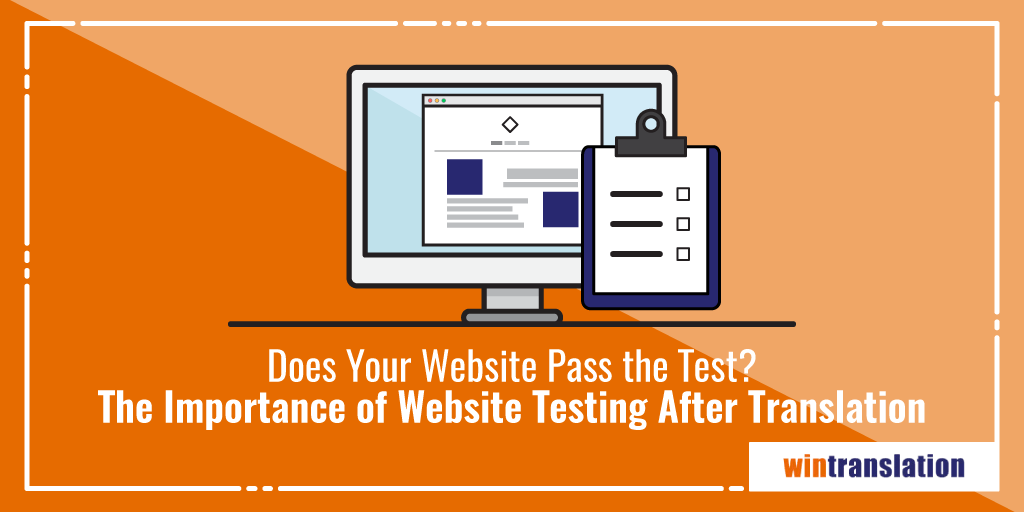 Most people are familiar with the California Milk Advisory Board’s extremely popular “Got Milk?” campaign. However, what most people don’t know is how the campaign nearly took a disastrous turn when expanding to Mexico. When the “Got Milk?” slogan was translated into Spanish, it was interpreted as “Are You Lactating?” Fortunately the blunder was caught early on by a Spanish advertising company before it went public, and saved the company millions of dollars, and even more embarrassment. This incident is a perfect example of why it is so crucial to have your translated material “tested” by a native speaker of the language who understands the local culture. This is especially true with online marketing where information can reach millions of potential customers within minutes of going live.

You may be wondering, “testing? What testing?” Our website has been translated, revised, and imported to our CMS. Our translation provider has performed QA on the translation, everything seems to be working fine, and we have already reviewed and approved it internally. Why do we need to spend more time and money on testing? Let’s just go ahead and launch it! The fact is that while your translation partner has probably done a fantastic job translating and localizing your website, there will always be a few things that fall through the cracks. Without a round of testing in a web browser (or two), you may find yourself facing potential embarrassment down the road when a client points out a problem on your newly live site.

What sort of problems can arise that would require testing after everything is imported and about to go live? Let’s explore a few potential issues that should be checked for.

One of the most common, and easiest to spot mistakes is missing translation. When exporting content for translation, one usually doesn’t think to export the static/shared/common content such as the header, footer, navigation and 404 error pages. If you copied and pasted the content to Word documents, the metadata, such as page title and image alt texts, is most likely lost.  However, this metadata is important for SEO, and for accessibility, and therefore definitely should be translated/localized. In addition, depending on the theme(s), widgets, and plugins you use, there might be some extra text that required translation.

Most websites have social media buttons. However, some might not be accessible from all countries, or may not be of any interest for the audience there. For example, over 20 countries around the world are either currently blocking, or have blocked YouTube in the past. Similarly, advertising the Facebook button would not make sense for countries which do not allow users’ access to Facebook.

The various payment options often offered by many English ecommerce websites might not work everywhere around the world.  In countries like Russia, many still prefer to pay by cash for purchases made online, or to use Yandex money, a payment method offered by Russia’s most commonly used search engine. Therefore, the payment options offered on your website must be in-line with what is actually available in that country.

Testing will determine whether or not your text displays correctly and if there are issues with special characters, or right to left languages. Additionally, when content uses rich media or even something as simple as a background image, the layout can be totally “off” after translation. Even if the translation is correct, often-times the language will not display properly (see example below).

Additionally, testing will be able check if images with text inside have been translated and if they are displaying correctly. It is also important to make sure that images alt tags have been localized. E.g.: if you are targeting China, one important element to rank on Baidu (the main Chinese-language search engine) is to have the images with Chinese tags and names.

However, unlike missing translation, this will require some time to fix, so it is especially important that it be caught before your website goes live.

On this webpage, the Arabic is not displayed properly. While the translation is technically correct, it is possible that the CMS system does not support Arabic, or the language was not declared correctly. The letters are disjointed and the error will automatically be visible to an Arabic-speaking visitor to your site. Site-testing by someone familiar with Arabic could easily solve this problem.

Testing your website will verify that all links are working properly and that they are pointing to the appropriate translated page rather than the English ones.

For example, the forms for English based websites usually follow this convention for addressing people: <First name> <Last name>. However, in some countries such as: China, Japan, Vietnam, etc. the last name comes first and therefore the message structure for addressing should be changed. This, and other similar issues are usually revealed at the testing stage.

Lastly, but perhaps most importantly, your website must be tested by a local or native language speaker to assure that all images, photos, slogans and colours are neutral and do not have any negative connotation in local culture. The “Got Milk?” example mentioned earlier is a great example of how disaster was averted by someone familiar with the language. There are many other cases where such mistakes were not caught on time and cultural taboos were broken with the result of offending potential customers. In some cases, companies have tried to act culturally-sensitive, but ended up with an event bigger blunder. For example, in 2012, IKEA tried to adapt to local Saudi Arabian culture by editing pictures in their catalogue by airbrushing women out—something they thought would be appreciated in local Saudi culture. However, IKEA’s actions ended up backfiring and creating a controversial and unpleasant situation for the company.

In 2009, a similar blunder was made Microsoft in Poland when translating their English-language Web site into a Polish-language web site, they also replaced a black man’s head with a white man’s head. In the process of attempting to make their website more culturally specific, they did not have their images tested properly and ended up having to apologize for the mistake.
While translators are very aware of many of the issues, they do not actually get to see the full website at the translation/editing stage, which is why the importance of testing your website after translation cannot be over-stated. Your company has invested a lot of time, money and effort into having your website translated, so why risk it all by launching without testing? The extra effort will be well worth it in the end!

To get started on your website translation project, fill out this free quote request and we will help you from step one until the end.

Sheza Khurshid joined wintranslation in 2014 as Web Marketing Coordinator where she works on the company website, blog and manages wintranslation’s social media pages. Her work focuses on creating engaging and informative articles, newsletters, and other content for clients and those interested in learning about translation services and related topics. She works on maintaining wintranslation’s online presence through ongoing SEO campaigns, as well as through various outreach campaigns. Additionally, she works with clients to ensure they are satisfied with wintranslation’s services, and to see how to better serve current and future clients. Sheza is a graduate of the University of Windsor from which she holds a B.A. as well as an M.A. in Political Science with a focus on Media Studies and Communications.