Scotiabank is one of North America’s leading financial institutions, and Canada’s most international bank.
We work with marketing, multicultural banking, mortgage sales and many other departments within Scotiabank to provide translation and adaptation for languages such as Chinese, Urdu, Spanish, French, Tagalog and Punjabi.

We worked with their IT team to successfully create a user interface in Simplified Chinese, Traditional Chinese, and Spanish for their Automatic Bank Machines across Canada.

Since the English screens were created through a proprietary tool, the programming team at Scotiabank couldn’t provide the source files for localization into Chinese and Spanish. So, wintranslation received several hundred image files (BPM), each representing a different ABM screen and our engineers have manually recreated each string into Chinese and Spanish mirroring the English text. 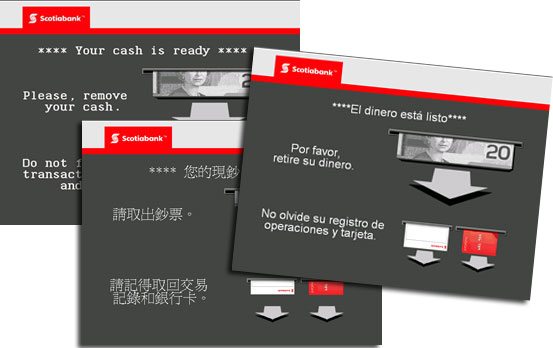 I love the one-stop convenience. I did not hire you based on your size. You proved yourself and built trust over time. You have that ‘can-do’ attitude and entrepreneurial spirit.

Felicia Bratu is the operations manager of wintranslation, in charge of quality delivery and client satisfaction. As a veteran who has worked in many roles at the company since 2003, Felicia oversees almost every aspect of the company operations from recruitment to project management to localization engineering. She recently received certification as a Localization Project Manager as well as Post-Editing Certification for Machine Translation. Felicia holds a BSc. in Industrial Robotics from the University of Craiova, Romania.