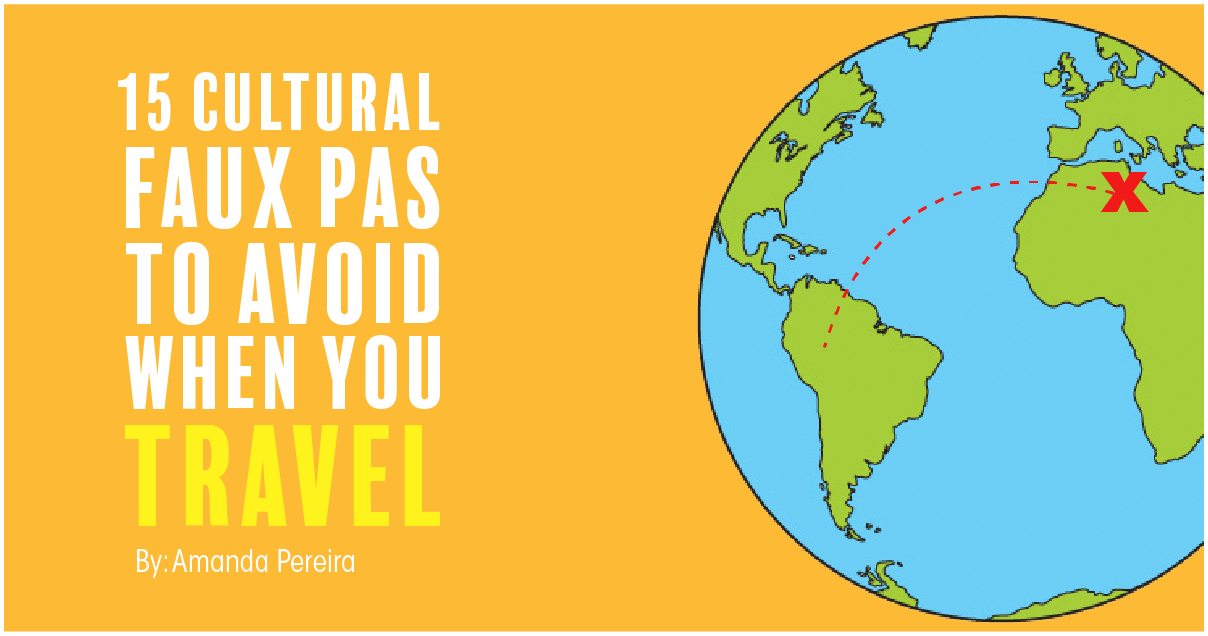 Travelling to a different country can be an exciting, and fun experience, but it can be a scary and nerve-wracking experience as well. Going to a new country, you’re not only faced with possible language barriers, and no idea how to get anywhere, but with so many cultural differences you have to be very careful that you don’t do something that could potentially offend or scare locals.

Different countries and cultures have different traditions and different ways of doing things. Something that could seem completely harmless to you could be offensive to someone in a different country. When you go to a new place it’s important that you do as much research as possible and make yourself aware of the countries cultural faux pas that you’ll need to avoid.

We’ve compiled a list of 15 cultural faux pas to give you an idea of what should be avoided when you travel to somewhere new.

If you’re in Nepal and need to get around someone sitting or laying on the ground, make sure you walk around them and not over them. Stepping over someone in Nepal, particularly their outstretched legs, is considered disrespectful and impolite.

While giving someone the thumbs up sign is generally seen as a positive and encouraging gesture, in some places in the Middle East, it’s actually considered an offensive and foul gesture.

In most countries, shaking your head up and down means “yes” and shaking it from side to side means “no,” but in Bulgaria it’s actually the opposite. In Bulgaria, nodding up and down means “no” and shaking your head from side to side means “yes.” This is an extremely important thing to know if you’re going to Bulgaria, as one wrong head nod can give someone the wrong idea.

In Japan, your business card isn’t just a small piece of paper with your information, it’s considered a representation of you and should be handled in a specific way. Business cards are given and accepted with both hands and are never written on or put in someone’s pocket or wallet, they should be put in a card holder.

When visiting a church in Italy, make sure your legs, midriff and shoulders are covered or else you will not be allowed to go in.

In Hawaii, there’s a lot to keep in mind when being given a flower lei. First, never refuse a flower lei if it is being given to you. Second, when someone gives you a flower lei they will also give you a kiss on the cheek, it’s important that you don’t refuse it. Lastly, never take off your flower lei in the presence of the person who gave it to you as this will be seen as disrespectful and insulting.

If you use a public washroom in Singapore, make sure that you flush it when you’re done. If you don’t you can get a fine of approximately $150 dollars.

Giving someone the “A-Okay” symbol is usually used as a harmless way to give reassurance, but should definitely be avoided in Brazil. If you show this sign to a Brazilian, they will take it as if you showed them the middle finger.

10: Nothing Goes Over My Head

When in Thailand never touch a person’s head, or pass on object over it. In Thailand, the head is considered sacred and the holist part of the body, so touching someone’s head or passing something over it is seen as very disrespectful.

In India, if you’re going to shake someone’s hand make sure to use your right hand. The left hand is considered dirty and is usually associated with the washroom, so always remember to use your right.

Typically, raising your hand with your palm and five fingers facing out means “stop” “high five” or “talk to the hand,” but in Greece this gesture has a completely different meaning. In Greece, they consider this gesture to be offensive and a huge insult. The only thing more insulting than sticking out one hand with your fingers out, is sticking out both.

When eating in Spain, make sure you bring a big appetite as you will be expected to finish your entire plate of food. Leaving food on your plate can be seen as rude and is insulting to the host.

Finally, there’s one major cultural faux pas that no matter where you are should be avoided at all costs. That faux pas, is speaking a language that you have no idea how to speak. If you don’t truly understand the language, you might end up saying something completely different than what you meant to say. Take it from us here at wintranslation, saying the wrong thing in another language can have many repercussions.

These are just a few cultural faux pas to keep in mind when you plan your next adventure, but it’s always a good idea to do a little research, learn as much as you can and memorize a few phrases to make sure your trip is nothing but smooth sailing.